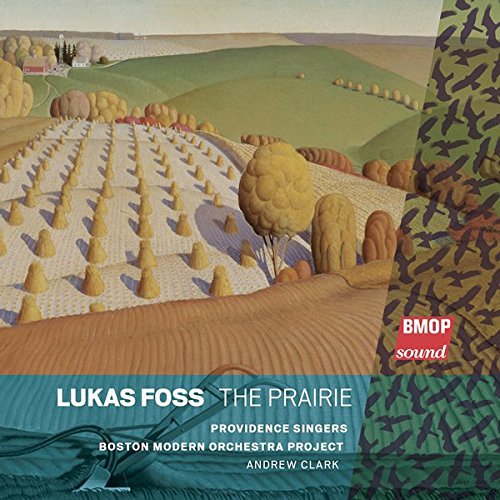 Lukas Foss's "The Prairie" is a secular oratorio based on Carl Sandburg's epic poem of the same name. Drawing upon Sandburg's journey through the landscape and lives of the Midwest in the 1900's, Foss has embarked on a journey of his own, creating an iconic work of American classical music that embodies the hardships and optimism that defined a generation of men and women braving industrialization in America. Offering eloquent performances by Elizabeth Weigle, Gigi Mitchell-Velasco, Frank Kelley, Aaron Engebreth, the Providence Singers, and the Boston Modern Orchestra Project, this recording beautifully captures the elegant and equally imaginative language of Lukas Foss.

While the recent passing of Lukas Foss (1922-2009) strikes a sad note for many of us, the release of this superb recording of "The Prairie" serves to both celebrate and elucidate his unique genius and extraordinary life.... Though not known principally as a composer of choral music, Foss' extensive oeuvre includes several distinctive choral works, among them the American Cantata, "Behold! I Build An House," "De Profundis," "A Parable of Death," "Psalms," and the cantata that launched his career, "The Prairie." Composed largely at Tanglewood in the early 1940s and premiered in its entirety under Robert Shaw in 1944, "The Prairie" reflects Foss' predilection for amalgamating diverse compositional techniques. Audible influences include Debussy's "La Mer," Prokofiev's "Romeo and Juliet," Hindemith's "Cardillac," Stravinsky's "Symphony of Psalms," and most notably Copland's "Billy the Kid." Foss openly cited Aaron Copland as a major influence at this point of his compositional development, describing "The Prairie" to this writer (and others) as "very Coplandesque" and as a piece that "started my love for America, my new country."

With its occasionally folksy treatment of texts from Carl Sandburg's "The Cornhuskers," "The Prairie" represents a bygone era. Concerning the textual inspiration of "The Prairie," Foss stated: "The attempt to develop an oratorio style based on the American soil and spirit is not new, but Carl Sandburg's epic poem, it seems to me, offers new possibilities in its earthy and almost religious approach.... The protagonist, simply, is the prairie, [which] grows until it becomes the symbol for the all-embracing principle of growth itself."

In spite of its consistent performance history, especially the often excerpted "Cool Prayers," until now the only available recording of "The Prairie" was a 1976 Turnabout LP performed by the Gregg Smith Singers, Long Island Symphonic Choral Association, and Brooklyn Philharmonia, conducted by the composer. Three decades later, we finally have been given an exciting new recording.

The robust and fearless ensemble singing of the Providence Singers, outstanding orchestral playing of the Boston Modern Orchestra Project, and collective vocal agility of the soloists, integrated with conductor Clark's commitment to the composer, has yielded a first-rate reading of this pioneering work. Particular sonic highlights can be found in soprano Elizabeth Weigle's ravishing lower register, baritone Aaron Engebreth's breathtaking clarity of tone, and Andrew Clark's appropriately heroic interpretation.

Besides its artistic triumph, the excellent packaging of this recording - complete with relevant words from Foss himself and authoritative notes written by retired long-time Boston Globe chief music critic Richard Dyer - results in a clear-cut recommendation for immediate purchase.

Perfect plates of your favourite carb

Get inspired by our nutritious flavour-packed recipes including vegetarian, vegan and meat options. Read more

Dish of The Month

Trending this week on GF